Posted on November 19, 2011 by cheapskateintellectual

“If I had influence with the good fairy who is supposed to preside over the christening of all children I should ask that her gift to each child in the world be a sense of wonder so indestructible that it would last throughout life, as an unfailing antidote against the boredom and disenchantments of later years, the sterile preoccupation with things that are artificial, the alienation from the sources of our strength.” — Rachel Carson, _The Sense of Wonder_ (1964)

Part One of my Italian fantasy is a working visit here (ah, those Cinta Senese!)

But a piece of Part Two came true amid an astounding blur of stress this week (the kind where you literally forget what day it is), when a friend made good on his promise to lend me one of his road bikes for a little while.  I’m an inveterate anthropomorphizer — as a child, even the thought of unpurchased toy animals in the store on Christmas Eve, glass eyes beseeching as the lights winked out around them one by one, could make me cry.  So, inevitably, I named my new visitor…. Signor Bianchi.

Signor Bianchi is a boy because his owner is, just as Old Betsy (my 1995 Giant Iguana mountain bike) is a hardworking woman because I am — and because trusting my life and limb to a machine is easier and more fun if it has a personality.  The Signor is pale pistachio green, nervy, lean, and fast.  He has Campagnolo gears and skinny tires and his name printed on his frame and even on his matching pistachio-green water bottle holders.  In his bony little saddle, I can ride twice as fast as I can on Old Betsy with the same amount of effort.  The Signor is a Thoroughbred racehorse, always ready to rev up and go (except onto gravel roads, where he cannot go).  Old Betsy is a sturdy draft-cross foxhunting mare, ready to crash through thickets and climb any hills (including gravel.  And luckily I do get to ride a big mare exactly like this when I go back to Alabama.) It’s right to be grateful to the creatures that carry us; somehow right, even, to give even the inanimate ones a soul.  This was the best, and most enduring, lesson of my country childhood: that, as Donald Revell writes in his wonderful book The Art of Attention: A Poet’s Eye, “The world is alive and languaging, though it will not pause to be reread or composed…. Life presents itself at velocities beyond representation, but quick attentions can quicken our poems, and then oh how prolific all presences become.”  The world is alive and languaging.  Amen.  As Colette wrote in one of my all-time favorite books, My Mother’s House, “To those who live in the country and use their eyes everything becomes alike miraculous and simple.”

And so this is the way I love Old Betsy; she has carried me a long, long way.  But I am being drawn irresistibly into what may be a life-changing new relationship.  After even the two twenty-minute spins that are all I’ve had time to take, the muscles in my legs and back are woken up in new ways.  And yet I look at old Betsy, my dear old mare, and feel a pang.  Here we are at our favorite spot, which I discovered with her when I first got serious about biking.  The odometer I installed on her about three years ago has now passed 3,000 miles. 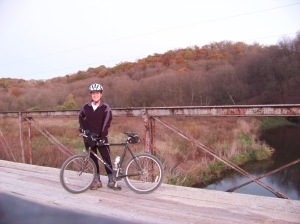 “You need to just work out a payment plan and buy a new bike,” friends advise. “For real.”  It’s true; I’m hitting a ceiling with my dear old Betsy.  But with Signor Bianchi’s entrance into my life, some other interesting types of awareness are stirring.  There are good ways and bad ways to bring things to life in your mind.

As I envision the changes a new bike might bring me, body and soul, I feel an exhilarating, dizzy little hit of desire that exactly resembles the wallet-opening phase of infatuation: I will buy you anything! ANYTHING!  Having been the beneficiary, from men (diamonds,  etc.) as well as the giver, to men (first-edition books, hand-knit scarves, and a $250 limited-edition photograph of Eudora Welty awarding William Faulkner the Gold Medal for Fiction from the National Institute of Arts and Letters in 1962, the last trip Faulkner took outside Mississippi), I know this impulse from both ends.  Now, of course, I do my best to give it the same skeptical eye as Faulkner gives the camera here — because money = love is a slippery equation.  Physical objects can only do so much to gin up feeling where it does not exist.   But I’m still an inveterate pamperer-of-loved-ones-with-food.  (I’m a Southern woman.  In this case if no other, culture is destiny.)

Even as I feel this urge to spring for a brand-new bike, a calm, gentle voice inside me says no, not yet. I rest in a deep, deep knowledge that the old money habits are truly broken: I’m not going to bite off new debt until I have a significant cushion of savings.  I think about taking on some new obligation – even for something so healthy and joyous as a new bike – and feel, amid the excitement, a sick twist of worry in my stomach I have learned, after all these years, to pay attention to.  I can enjoy the world without spending money to do it, because the vision that truly enriches your life does not depend on money.

This week in my Contemporary Literature class, wrapping up our semester of “nonrealist” writing (Angela Carter, William Faulkner, George Orwell, Margaret Atwood, Toni Morrison), we’re reading about the natural world, including fable, figurative language, and allegory, and considering the ways that language, by helping us encounter the world in fresh and wondrous ways, may prompt the ethical commitments necessary to sustain and cherish it.  This week, amid philosophical excerpts from Elaine Scarry, Jane Bennett, and James William Gibson, and an account of being touched by an octopus, we looked at short pieces by Terry Tempest Williams and Jules Renard, whose utterly delightful little book Nature Stories enchanted my students.  “Enchanted,” as these sources will tell you, is a philosophically and ethically important word — because the moments of wonder that stop us in our tracks can make us freshly alive to the world, and freshly committed to its protection.

Nature Stories is a series of semi-creative-nonfictional prose pieces that are perhaps better called prose poems, translated from the French and ranging from one page to two words long, each describing some element of French country life.  Here’s “The Butterfly,” in its entirety: “This love letter, folded in two, is looking for a flowery address.”  And here’s “The Toad:”

Born out of a stone, he’s living under a stone.  He’s building a tomb there.  I often visit him, and each time I lift the stone up, I’m afraid of seeing him — and afraid he may not be there.  He is there, hiding in this dry, clean, narrow den which he owns and fills, completely; he’s as swollen as a miser’s purse.  If rain forces him to leave it, he comes toward me.  A few lumpy jumps and there he is, watching me through his blowsy eyes.  People are unfair: they insult him by treating him as a leper.  I squat down beside him and move my human face close to his.  Then I’ll swallow any disgust I still feel and I’ll stroke you, you toad! You have to swallow many more insults in your lifetime that make you sick.  But yesterday, I was tactless.  He was oozing and fermenting, his warts had all burst.  “You poor chap!” I said.  “I don’t want to hurt your feelings, but heavens above, aren’t you hideous!” He opened his toothless, childish mouth and replied, with a slight English accent, “And what about yourself?”

As a worshipper of St. George Orwell, who also wrote about toads, and as a gardener who once built a little house for a leopard frog, I’m utterly delighted by this.  Renard sketches, among other things, poppies, bats, swallows, cats, oxen, donkeys, and the conversations that go on in a garden (“An asparagus: ‘My little finger tells me everything.’ A potato: ‘I think I’m giving birth.'”)  With my students, I wrote some Renard-isms of my own, looking out the windows of our classroom at our college’s new wind turbine, turning rhythmically: “It counts each cloud on its fingers: one, two, three, four…”

Students were drawn in, too, by the ethical questions this material poses: how to see the world clearly, give other people or creatures what Hannah Arendt calls “a claim on our thinking attention,” and then follow the “claims” of that expanded vision into an ethically engaged and active way of life.  Because this is the best result of letting yourself be enchanted, of discovering and staying alive to the world.   At its most naive it is mere anthropomorphism or sentimentalizing.  At its best it’s a way to stay alive to the mysteries that are everywhere, waiting to be found, if we only look closely enough.  Everything might have a reality of its own, beyond our understanding or use of it, that depending on your use of terms might be called a soul.  It does our human hearts good to look for the souls in the world of material things and material creatures beyond ourselves.  It keeps us humble, and it keeps us dreaming, and it keeps us keen, and it keeps us working for the good of whole ecologies of life beyond ourselves.

*** p.s., a note from Signor Bianchi’s owner on reading the above: “From Wikipedia: ‘Bianchi bicycles are traditionally painted Celeste (colour) (pronounced che-les-te in Italian, Se-lest in English), a turquoise also known as Bianchi Green, (and sometimes, incorrectly Tiffany Blue, a copyrighted colour). Contradictory myths say celeste is the colour of the Milan sky, the eye colour of a former queen of Italy for whom Edoardo Bianchi made a bicycle (the crowned eagle of the company logo is an adaptation of the former royal crest) and that it was a mixture of surplus military paint. The shade has changed over the years, sometimes more blue, then more green.’ But I say it is the color of the universe.” Agreed. 🙂

2 Responses to Buon giorno, Signor Bianchi:, or, enchanting the world.