Posted on January 19, 2012 by cheapskateintellectual

The kitchen of your mama’s house in Alabama is not the best place to announce to your family – all human and animal doctors whose lives are full of horses, cattle, and dogs — that you are about to embark on home vermiculture. Especially if you phrase it, casually, “Hey, y’all, when I get back to Iowa, I’m gonna get worms.”  My sister’s shocked look was only partially eased by my explanation.  “Oh, thank God,” she said.  “I thought you were gonna be one of those people who take parasites to lose weight.”  Yes, worms can take you into territory that’s just plain gross.  But I’m a gardener.  I have to think differently.

So this week, with a plastic tub in the back of my car, I went to see my generous gardening mentor.  Down in his basement, he opened the lid of his “Worm Factory” bin and scooped out three big handfuls of wriggling, small red earthworms mixed with tea and coffee grounds and other kitchen scraps that they had already begun to turn to black and crumbly compost.  The smell was earthy and sweet, not stenchy.  “That’s how fast they work,” he advised.  “I just fed them, and boy, it didn’t smell this good when I put it in there.”  He dropped them into my bin and within five seconds they were gone, burrowed into the mass of scraps I’d prepared for them.

What I didn’t expect was how excited I feel about having these worms, how I’ve been checking on them today like a box of new puppies.  Pulling into the parking lot of our little grocery store, I spotted my friend Sarah walking by and hollered, “Hey, come see what I’ve got!”  A market gardener herself, Sarah is also a girl to get excited about worms; together we marveled at the moisture already beginning to collect at the bottom of the bin.  That, of course, will become the famous “worm tea” you can drain out from the bottom of the bin (or the spigot on the “Worm Factory”) for the happiest plants around. Back at home, I set them in a dim corner of my basement and wrapped a towel around them to block the light.  Worms, of course, prefer the dark. 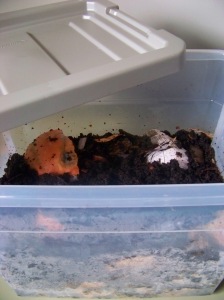 ‘Bout to open up a whole nother can of….

You can’t see the worms, but they’re there.

Like the rest of my family, I have a pretty specific starting point with “worms,” based on memories of jamming tubes of ivermectin paste between a struggling horse’s back teeth.  At some level of my thinking, worms may always be animal, parasitical, their interactions with humans vaguely squeamish and alarming unless a hook and fishing line are involved.  Yet the first time I thrust a shovel into my black Iowa river-bottom backyard soil and turned, and marveled at how honeycombed with wormholes it was — and watched the rosy earthworms, some as big as baby snakes, wriggling out of sight — I understood that worms were also something more.  Not for nothing, perhaps, is one of the many awesome brain-busting mysteries of physics called by this homely word.  Who knew that there were even different species of worms, that the yard worms are different from these small ones that can live in their house bin in the dark, turning food scraps into soil? Not me, until now.

Worms do take you into the heart of the processes that turn your body, and the earth, with the seasons, and make both of them grow.  Food becomes soil becomes more food becomes more soil.   Just about everyone I know who grew up on farms or has much to do with animals finds the smell of manure at least somewhat familiar and comforting, for various reasons.  “Aah,” says one farmer friend with a grin and deep inhalation, “smells like money.”  But to him, and to me and so many former farm kids, that smell also touches our ideas of home, earth, land, something enduring and real, with a reality that is not dependent or focused on us.  That is as it should be; we are players in a system to which it behooves us to accommodate ourselves and our thinking.  And that’s just fine.

I doubt I’ll ever take my own home program as far as composting toilets – although I know people who do, and respect their reasoning – but I do see the importance of pressing ourselves to rethink what we may too easily label “dirty,” including compost, food waste, soil, and worms.  Reality is bound to cycles of the land and the body to which so much in modern consumer culture, with its insistence on tidy cliches and storebought “solutions” and a “reality” created and mediated by things with screens, is deeply traitorous, deeply false.  Acknowledging the messy grandeur of biological reality — death, birth, dirt, blood, entropy, growth, at once rooted in and reaching beyond human life — can yield in us an attitude of what I can only call a kind of cosmic unflappability.  This attitude seems to me deeply necessary to possess, individually and socially, and it can birth in us a vision that reaches a very long way.  Look how much happier and healthier we become, as people and families and communities, when we lose our hysterical insistence on tidying and on intellectually sanitizing the sources of our food — in particular — out of sight, letting ourselves and our children believe that grapes and ground beef alike magically appear in the aisles of our local SuperTarget, untainted by labor violations or animal cruelty.  Look how our lives improve when we let go of the need to make our houses look like magazine centerfolds; clean and pretty doesn’t have to mean scorched by groundwater-polluting, fragrance-added chemicals or cluttered with tchotckes made by kids in Taiwan.  (So often, “clean,” especially in terms of food, has come to mean “made somewhere else, by someone else.”)  Look what happens when we accept that the meat on our plate came from an animal that died and that our actions can make its death and life dignified or degrading.  Look at everything, inside and outside ourselves, that changes when we make peace with the reality that reality is cyclical, entropic, messy, and beautiful beyond any definition of beauty that our modern screen-“reality” can offer.  Look at how our vision of the physical world and the realities it embodies can become — well — incarnational. Here is the physical, sensory world.  And here we touch the edge of all the intangible things that it can mean.

From what I have heard, my new worm system will be easy to maintain and to keep clean; embracing the entropic nature of biological reality need not, of course, mean living in messy, unsanitary conditions that will make you or your guests sick.  My indoor garden — particularly the citrus trees — are already longing for the day when the worm tea will be ready.  And as Shannon Hayes has written, this will be one more step to making my home a living ecosystem — bringing my own path of sustainability one degree further to life.  With all the composting and recycling I do — and now, with the vermiculture — I end up filling, on average, something less than one 13-gallon kitchen trash can bag every two weeks, sometimes three.  It’s a good feeling.

When you do your thing, as Paul Loeb has said of activism, you never know who you might inspire.  That very night after settling the worms into their new home, I had the great pleasure of hosting my Honors Paideia students for a spaghetti dinner — with sauce from tomatoes and basil grown and frozen from my own back yard and bread that had come out of the oven an hour before.  Talking about sustainability and do-it-yourselfing, we wondered if maybe theirs would be the generation that rediscovered the pleasures of the hands-on life, for real.  And after a tour of my basement Sustainability Stash — preserves, chest freezer, dried herbs hanging from the floor beams, and, of course, the worm bin — several students asked me, “Would you teach us how to make preserves?” Of course, I said. And we started making plans for a second social gathering at my house in the spring, among the new shoots of growth in the garden.  I’m blessed to be able to do my thing, and even more to be able to share it.

** A friend writes with this additional bit of wormishness:  “An anarchist poet, Voltairine De Cleyre, once wrote a book of revolutionary poems called The Worm Turns. When detectives came and ransacked her apartment, they disregarded her book, which could have been used as evidence. “It’s only about worms,” they said.” Yet another way worms let you do your thing, I reckon. Thanks, Lee!

** Another friend adds: “Some Frenchman once said, “Man can’t make a worm yet he makes gods by the dozen.” Funny that. I have a friend, an artist, who uses worms and beetles to clean the skeletons of small animals he uses in his artwork. Busy little things.” Thanks. Bob!

This entry was posted in animals, compost, gardening, home. Bookmark the permalink.