Posted on October 9, 2012 by cheapskateintellectual

Sometimes I think “home” in my mobile life has become less a specific place than a kind of place where certain conditions obtain — the sense of comfort, practicality, and freedom that comes from being able to move around on foot and bike as well as car; the ability to eat healthy food that didn’t ride into town on an overkill of petroleum; the presence of people alive to laughter and spirit and language and generosity; and most of all the availability of that great green world of trees and grass and running water, from my own backyard garden (nowhere I can’t garden will ever be “home” again) to the woods beyond it.  “Home” has had to be for so many years something I have carried on my back and in my brain like a snail shell, ready to shelter myself and make my own life where I am, far away from my family’s home in Alabama.  I can make myself happy just about anywhere, and have.  But this week, as I briefly visited the place that was my home for eight years of graduate school — Chapel Hill and Carrboro, North Carolina — I felt a deep tug of longing to be back here, specifically to be back and doing the same things I have learned to do in my beloved northeast Iowa town: growing vegetables, biking around, canning and doing and making and continuing to campaign for a human-scaled way of life against all the forces from corporations to mindless media saturation to car-centered suburbs that would take it away.

Southern rural culture has often been surprisingly hostile to this path, as red-state rural people can still be found (outside the South, too) who politicize organic food (for instance) as something only “liberals” care about. But coming back to the South now, I see so many signs that real and permanent change is in the wind as we tap again into our traditions of land-centeredness and place specificity.  Publications from Garden & Gun to the New York Times and even the Economist’s “Intelligent Life” have been heralding a Southern local-food renaissance for some time, marked by a rise in farmer’s markets and restaurants that manage to avoid, surprisingly often, the yuppie preciousness that can dog these efforts — it’s just harder to put across yuppie preciousness, I think, when you have a Southern accent. (And thank God for that.) If not now, when? If not here, where? And really, who better than us?

Every time, when I am back in Chapel Hill, serendipity happens.  A chance conversation at Weaver Street Market led me to a new friend, Caroline, and a visit to Pickards Mountain Eco-Institute, just outside of Chapel Hill, where she is living and working.  Its mission is to be a demonstration site and laboratory for exactly the sort of hands-on life and connection to the natural world that so many people have been seeking, often without knowing it.  Its mode is one of genuine hospitality — from the driveway signs suggesting “Drive at Nature’s Pace” to the kind people there (including Caroline, a student of Arabic and French, Jim, a professor of astrophysics and skilled electrician, and cofounder Tim, who greeted me, a stranger, with a hug.)  In 2012 we think of the way of life it promotes — organic gardening and self-sufficiency and closeness to nature, including bees and chickens and rabbits — as something kind of new, and at its worst kind of susceptible to co-opting by the precious and trendy.  But being out in a damp and fragrant North Carolina fall day — still green and brown in early October — I was reminded how old this path really is, and how true its heart.

At the center of the property stands a hundred-year-old farmhouse.  Its stone steps lead onto a wide porch with a table for potlucks and a bowl for a nimble brindled cat and thick privet hedges — so sweet in the spring — bordering the foundation and big trees overhead.  So many times, on hunting trips with my father, I came upon abandoned houses like this – stone chimneys still upright as the roof sags away, rooms littered with trash, broken windows, and always that sign of some long-dead woman’s homely and beautiful yearnings, a scatter of springtime daffodils, multiplying underground and springing forth even after the hands that put them there had turned to dust. But this house is still very much alive, with another farm resident, Matt, playing guitar in the kitchen and shelves of books (Hannah Arendt, Thoreau, Wendell Berry, Garcia Marquez) and jugs of vinegar-mother and rabbits and chickens in the pens beyond and voices painted onto the walls:

It felt good to be out in the country, too, because I was in town that weekend to remember Doris Betts.  A great writer and teacher, Doris was also a country woman who kept as many as thirty horses on her Chatham County farm at one time, many of them too old to do anything but get fed and petted.  Raising children, marking students’ stories (with impeccably written, acute comments those students, now writers themselves, still remember), caring for an aging mother and taking on thankless administrative tasks someone of her stature could have just passed on to others — Doris did it all. Her example taught me many things, but most of all the power of being a writer and teacher who works with her hands as well — a woman who does.  But as the after-service talk among her friends reminds me, and as Doris herself would have pointed out, it’s tempting to idealize the women who do, because they make it all look so effortless — and therefore we ask them to do too much.  It’s useful to keep in mind, too, that idealizing the farming life can lead you down a similar path: doing things a simple way isn’t always simple, and idealizing an agrarian (particularly Southern) way can open the door to a denial of reality that makes working farmers laugh and historians frown.

At the deepest heart of my notion of Alabama as home is a garden tended by two very different men – my grandfather and the African-American man who worked with him. Grandaddy had an orchard, and roses.  Tommie– what we all called him, always — had a garden thick with collard plants (just as I have in my garden, now) and okra (ditto) and watermelons (I have one, which stopped growing after our first Iowa frost.) In between was a wellhouse with a tin dipper and a lush fig tree. Tommie had been born in the little red sharecropper’s house which still stood on that farm, with the rough-skinned lizards we called “rusty judges” scrambling under its stacked-stone steps. That place was Eden to me. 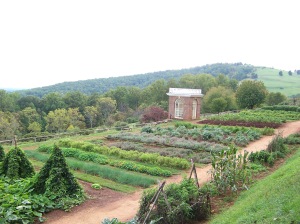 Before Chapel Hill I visited Thomas Jefferson’s famous house and garden at Monticello and ended up spending most of my time outside, walking through the garden and ticking off all the plants Mr Jefferson and I have in common. Towers of blooming snail-flower vine on that mountainside put my own little potted vine – which has to come inside every winter – in the shade, but the purple and white curls are still the same. So are the Listada de Gandia eggplants, and the basil and tomatoes, although Jefferson had a kind of okra I don’t have. 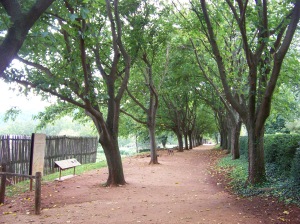 Along the row of mulberry trees just above the garden you can still see remnants of some of the plantation workshops operated by slaves to produce everything needed to keep the place running – a coal pit, a wood shop, an iron forge. They lined that walk, with the garden just below.  Enslaved people would have eaten this food and worn the homespun cloth they helped to produce here. But really, in no other sense were they working for themselves.

Photograph of enslaved people from the Museum of the Confederacy, Richmond, VA.

Nostalgia for the Southern agrarian past is risky, because of what it preferred (and can still prefer) to forget and on what it sometimes rested. Surely a big part of the modern South’s enthusiasm for suburbia and cars and chain stores is our memory a generation or two back of not having electricity, of mill stores and coal-town commissaries.  Rural life can also mean isolation, fear, the depression of fearing or knowing you will never have any greater wherewithal to move or change your home than you do right now.  You are a slave.  Or maybe you are in the holler deep in the mountains and fear you will never leave.

But as inauthentic as that type of nostalgia is, I still believe in the reality and worth and dignity of the rural South, and rural America in general, as a place worth reclaiming and repopulating with a right relationship to the soil and the trees and the water and the animals and each other.  We are better family members, citizens, writers and artists and teachers when we are also people who do.

I left with my new friends at Pickards Mountain a couple handfuls of seeds I had brought along from Iowa — one a black-eyed pea called Mississippi Silver (bush habit, highly productive) and the other the seed that made me a gardener, the Cherokee Trail of Tears bean.  This small black bean, which grows on tall vines and saves easily, was carried on the Trail of Tears by Cherokee refugees from the Southeast — including my part of Alabama – and recovered generations later by their descendants in Oklahoma, who gave it to the Seed Savers Exchange, where I found it.  Like trees, seeds are the living tissue of the past.  Grow and save them and you keep the past growing, like a green vine, right up into the present.  Of course, the past always does this anyway.  But we choose to forget it.

Grow, save, do, make, live in a relationship of humility and wonder with your land.  This is how Southerners can reclaim the best of our old agrarian ideals – doing for ourselves, living close to and cherishing this place for which, as Faulkner said, the tragedy is that God has done so much and man so little. This is how we, and everyone, can find our way back to a home that’s true, and that will endure.