Posted on April 28, 2013 by cheapskateintellectual 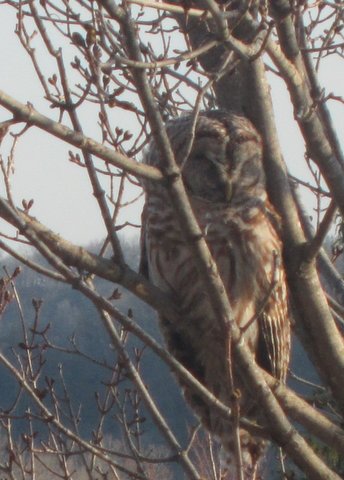 Photo of the owl outside Main, by my colleague Lise Kildegaard.

Coming out of my office late this afternoon, I spotted a barred owl up in a tree outside the building, hunched against the trunk, squinching his eyes against the light and stoically standing off a pair of crows who were hassling him. I got concerned, especially when he was still there at dark a couple hours later. The only reason I could see for him possibly wanting to stay was what looked like an animal burrow dug out near the foundation, or maybe what he just thought was a burrow – or maybe there is an owl nest on top of Main? So I called a raptor-expert friend and got some advice: we’ll leave him where he is and check on him in the morning. I was proud of the students who had hunkered in the hall to watch out the window, as intently as I did, and who stopped to look and notice and ask questions. It’s too easy to walk on by.

But oh, what you see when you look.  Owls have such big knuckly feet, and you never get to see them.  And there is just no face like an owl’s face.

Dinner last night with Inkfish, a brilliant trio now in residency at the Lanesboro Arts Center just over the Minnesota line.  Puppet theatre is too narrow a word for what they do.  Of course I asked them about “War Horse,” which I saw in London this January, and about how amazing it is that after five minutes you just don’t see the people manipulating the larger-than-life-size horse figures that flick their ears, shudder, canter, stomp, and tilt their heads in such a way that I knew the makers of those figures knew real horses well.  The Inkfishers, who do know those artists (the Handspring Puppet Company), confirmed this, and then they told me about the challenges of making animal puppets believable without being too lifelike (staying out of the “uncanny valley,” the space in robotics, art, and design where too much lifelikeness becomes creepy rather than alluring.)  “It’s about essentializing the animal,” they said.  Observe and pick the gesture or two that is most quintessentially cat, or horse, or owl.  Use your art to invoke that thing, not necessarily recreate it, and your audience’s imagination, in the space between the real and the art, will start to spin the threads that knit the two together.

On the radio today I caught the tail end of yet another NPR feature “questioning” the “benefits” of technology, including quoting yet another TED talk by yet another guy who opines, unironically and metaphor-deaf-ly, “robots are really flexing their muscles in the real world” before going on to describe – with nothing like the shame, or the regret, you’d expect from someone saying this – how fluently a robotics-driven car handled stop-and-go traffic alongside real drivers, and how this may spell disaster for trucking as an industry, which does, after all, rely on real people. I looked at the library book lying on my dining room table: James Howard Kunstler’s TOO MUCH MAGIC: Wishful Thinking, Technology, and the Fate of the Nation.  Based on my initial skim through, it’s pretty much what you’d think from this title, and pretty much what we need to heed but probably won’t.

Yet an ordinary guy in his truck can still stop and pick up a barred owl knocked into the center of the road by someone who didn’t stop, can stroke her head and talk to her, can tell readers (in the video’s comments) that she survived and did just fine, and that we can help keep owls from getting hit by cars by not throwing fruit or food out of car windows – it attracts rodents, which draw owls right down across a car’s path.

The hand on that wild creature’s head.  No face like an owl’s face.

Magic.  How ironic, all the ways we’ve forced that word into migration.  Moving to turn off the radio (and bike back to campus to check on the owl), I was stopped by an interview with poet Marie Howe.  An hour later, I was still just sitting on my couch, listening to the radio. (I never do that.)  Her insistence that technology is essentially limited in what it can do and express was salutary as only poets can be.  “Language is almost all we have left of action in the modern world,” she said.  “For many of us, action has become what we say.  Our moral life is much more in what we say than what we do.” And she said too that art is the only place left in the world we have made for ourselves that preserves for us the knowledge that we are living and dying at the same time.

Because art preserves that knowledge, it reminds us of the need for wonder, and the danger of believing that — as Hannah Arendt pointed out regarding totalitarianism years ago — through technology and our own engineering capabilities, all is possible.  Art preserves this knowledge.  And so does nature — rolling on so intricately and miraculously despite everything we have done, and do.  Our own screen-numbed senses quicken, again, when we give them over to it.  To the push and hum of spring, of sun and grass and water and the first daffodils.  To the stunning shy raptor you never expect to see right next to your building.  I wondered how it would be to touch that owl, remember lifting the body of a dead hawk that had fallen in our Alabama woods, years and years ago: how light it was, how light it is, all bones and feathers hollowed for air.

When the interview ended I biked up to campus again to check on the owl.  Still there.  Tomorrow morning both the raptor-expert friend I called and I will go to look at him again – but I will try hard to remember that maybe there is a process here the owl knows and I do not, some type of waiting it is undergoing that I can’t see, even as I try to read its stillness as something wrong or in need of help.  Maybe it is.  But maybe it is its own creature.  Just simply its own.

As I rolled home along the bike path just at dark, beside the river, bats swooping and fluttering over my head, a single owl called, high up on the bluff, out of sight.

“The Meadow” by Marie Howe

As we walk into words that have waited for us to enter them, so
the meadow, muddy with dreams, is gathering itself together

and trying, with difficulty, to remember how to make wildflowers.
Imperceptibly heaving with the old impatience, it knows

for certain that two horses walk upon it, weary of hay.
The horses, sway-backed and self important, cannot design

how the small white pony mysteriously escapes the fence every day.
This is the miracle just beyond their heavy-headed grasp,

and they turn from his nuzzling with irritation. Everything
is crying out. Two crows, rising from the hill, fight

and caw-cry in mid-flight, then fall and light on the meadow grass
bewildered by their weight. A dozen wasps drone, tiny prop planes,

sputtering into a field the farmer has not yet plowed,
and what I thought was a phone, turned down and ringing,

is the knock of a woodpecker for food or warning, I can’t say.
I want to add my cry to those who would speak for the sound alone.

But in this world, where something is always listening, even
murmuring has meaning, as in the next room you moan

in your sleep, turning into late morning. My love, this might be
all we know of forgiveness, this small time when you can forget

what you are. There will come a day when the meadow will think
suddenly, water, root, blossom, through no fault of its own,

and the horses will lie down in daisies and clover. Bedeviled,
human, your plight, in waking, is to choose from the words

that even now sleep on your tongue, and to know that tangled
among them and terribly new is the sentence that could change your life.

Another picture of the owl by Lise Kildegaard.

*** Update, Apr 29: When I got to school first thing Monday morning, the owl was gone. Consultation with Dave Kester, local raptor expert, suggested maybe it was a juvenile that had gotten a little off course and hunkered down to wait for the night. But we have good reason, we think, to believe the owl is OK.

This entry was posted in animals, art, attention, body, mystery. Bookmark the permalink.

1 Response to Essentializing the animal: owls, war horses, and poetry.