Posted on December 2, 2017 by cheapskateintellectual

Sen. Elizabeth Warren sits at her desk, coffee cup and phone nearby, holding a 500-page chunk of paper — the Republican tax bill — she was given an hour to read before the vote. “So,” she begins, “here it is Friday night, and I just want to give you an idea of how the Republican leadership thinks we are supposed to make laws in the United States Senate.” In an extended discussion that would be funny if it weren’t so painful – particularly for the legislative branch of the country that at least some people are still calling the leader of the free world — she walks us through the semi-legible, hand-scribbled marginal annotation (cut off at the edges by some hapless intern who hasn’t found the “93%” button on the copier?) that is passing for the text of actual, votable-upon, properly-considered legislation. “This isn’t right,” she concludes, “and this is not how America should be making laws. Shame on the Republicans.”

And yet, as of this morning, it passed. In the words of the New York Times, “The Senate passed the most sweeping tax rewrite in decades early Saturday, with Republicans lining up to approve an overhaul that will touch almost every corner of the United States economy, affecting families, small business owners and multinational corporations, with the biggest benefits flowing to the highest-earning Americans. Senators voted 51-49, as Republicans approved the nearly 500-page bill in the early morning hours after lawmakers received a rewritten version, which contained significant changes from the original bill that passed two Senate panels last month along party lines.” The bill is also going to open the Alaska National Wildlife to drilling and our educational system to further erosion as we continue, actively, as a country, to pursue climate denial and intellectual mediocrity, giving free rein to greed in the apparent belief that its wild gallop will carry along — not just trample — those of us living what the technology philosopher Jaron Lanier calls “real-time economic lives.”

The wealthy and the big corporations will love this. Few others will, especially considering its continued and systematic destruction of the environment, of health care access, and of higher education. Last I checked, this bill will open to taxation the already-laughably-small stipends of graduate students — just like the ones teaching your kid’s freshman comp class at the nearest Big State U and hoping to pursue the vanishing dream of tenure-track teaching and intellectual nourishment of the next generation. Student loan interest deductions — like those claimed by almost every human being under 60 that I know — go away as well. Remember all that controversy over limiting 401(k) and 403(b) contributions a few weeks back, which had me staring at my radio in disbelief: is this really the “conservative” party, endangering retirement savings? Retirement savings? And I quail before the disaster that this will wreak upon health care. By every measure, the poor and the precariat — that clinging-on-class to which more and more of us belong — are getting poorer, more precarious, separated from disaster by vanishingly thinner margins. And this bill promised only to continue that. Lots of us from all walks of life saw and spoke and wrote and phone-called our “elected representatives” against this. And yet it went through anyway. A clearer gesture of contempt for ordinary non-billionaires and what used to be thought of, optimistically, as our common good — clean environment, access to health care, educational opportunity, and, therefore, the opportunity to leverage ourselves up into something better than what we are right now — could hardly be imagined. 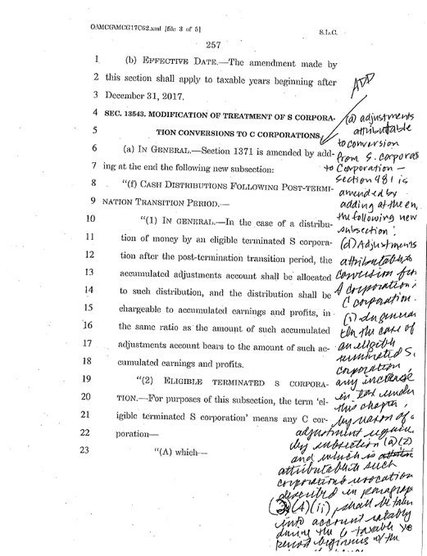 Reading this news, as I set aside a stack of papers by first-year students (not a one of whom, by the way, would’ve submitted pages that look like this for a grade), one phrase of Sen. Warren’s lingered in my mind: cram through. Unwillingly, dismally, I thought of the other shameful farce making its way through our public life: the sexual greed and power-abuse of women by powerful men. Is it any accident that such an approach to force — cram through, intimidate — is surfacing in public life from Hollywood to Google to the Harasser-in-Chief? Isn’t this the common thread in the bankrupt toxic-masculinity play staining screens and attention spans everywhere? Force your rampant greed on others. Slap a dollar value on everything, whether it belongs there or not. Impress-upon, break, fracture the bodies of women, children, the vulnerable, the Earth, the thawing tundra of Alaska whose very thaw, I read, now ironically makes it easier to lay in broadband cable. (Just what we need: more Internet, more social media portals through which our short-sightedness and credulity can be turned to someone else’s advantage.) Behold our republic as 2017 hurtles to a close: borne along by greed, hubris, and hucksterism to — where?

What’s wretchedly infuriating and sad about the trickle-down myth still parroted by supporters of this bill — give corporations a break and they’ll help the rest of us out! — is that it’s so obviously at odds with reality. Look around, y’all. You really still think that corporations care about us? Especially the “small businesses” driven out by big-box stores in your town and mine? Look around at the threadbare, warming world in which we non-billionaires live: potholed highways, collapsing bridges, paycheck-to-paycheck scrimping, and, as I write, a 50-degree afternoon on the second of December in the upper Midwest. You really think that trickle-down dream is going to work if it hasn’t by now? You really think corporations love us and want us to be happy? (Maybe that question needs a period, like the similar reality-confrontation from the girl in Hemingway’s “Hills Like White Elephants.”) You really think you can continue to build your own life in a bubble, untouched by what makes All Those Others Less Fortunate? How many more decades do you want to give these people to do the right thing? How far into your children’s, then your grandchildren’s, lives do you really want to wait for them to accept what it is not in their interest to see?

I’ve got two books coming out this spring, both of which argue, in various ways, the importance and power of living a good life where you are. Yet I also think a lot about how to keep that belief from slipping into the moral and intellectual flaw marking this tax bill and this President’s approach to “governing” and life: there is no common good, only what you can grab and secure for yourself, only what you can fashion and pay for as your own boutique retreat from any aspect of reality you prefer to avoid. Look at the phenomenon of “billionaire bunkers.” Look at the exemption in this tax bill, brainchild of Ted Cruz and Mike Pence, to allow tax-exempt 529 plan funds — formerly only for higher education — to pay for costs of “private religious schools” and homeschooling. Little encampments, fiefdoms, public sphere shrinking around homes in which tyrannical men and the women still determined, despite all evidence, to prop them up can nurture fantasies and fears — and prey upon the vulnerable, which, we now know, happens more often within families and homes than as a result of “outside” threats.  “The good we secure for ourselves,” wrote the great social reformer Jane Addams, “is precarious and uncertain until it is secured for all of us and incorporated into our common life.”

Behind all this is the same fallacy Laura Kipnis has identified as fueling the sexual harasser preying on his underlings: the fantasy of self-determination and power in a world in which we are interdependent, whether we like it or not. Sen Warren famously busted the frontier-hero myth a little while back: “you didn’t build that.” Flannery O’Connnor busted the Misfit’s belief, too: I don’t need no hep, I’m doin all right by myself. Sure, we’ve all got to work hard, be self-sufficient, push ourselves to do and be better. I’m a single 43-year-old woman who knows this as well as anyone, and teaches my students the same: if you don’t make it happen for yourself, nobody else will. But the spiking anxiety I see in them is no accident. We have made the world they are living in, in which we are all one natural disaster or health emergency away from ruin. Those of us GenXers in our late 30s and early 40s, raised on the work-hard-get-a-degree rules beginning to crumble as we entered graduate and professional school, are now finding these ostensibly stable degree-requiring careers (medicine, law, the professoriate) eroded as we also witness the erosion of once-stable values: Expertise matters. Facts matter. Reality is…you know, a thing. Not everything in a worthwhile human life, or in the nonhuman world granted to us to share, can or should be measured by dollars and cents. When, exactly, did these become controversial?

“By their works shall ye know them.” What you do, not what you say, tells me who you are. So it’s time to hold these people accountable. Here’s who voted and how. And let’s push them — and ourselves — to do and think better. What does “pro-life” really mean if not respect for the dignity and ability to thrive of living children on a living planet? What does “small business” really mean if the rules are different for a billionaire than they are for you? What does “personal health and wellness” really mean if a corporation can poison aquifers and we let them do it? What does “faith” really mean if if doesn’t push us past regarding our selves and our present needs as if that’s all there is to reality?

We can do better than this, y’all. We don’t have a choice anymore.

2 Responses to Greed, hubris, and cramming-through.