Posted on July 29, 2015 by cheapskateintellectual 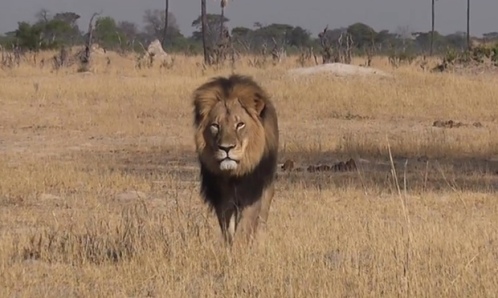 The Internet’s aflame with outrage over the killing of a male lion in Zimbabwe – a park favorite named “Cecil” – by a dentist from Minnesota. The lion was baited outside of park boundaries by the hunter’s guides so he could be shot, which is not only immoral but illegal. I mourn the death of this animal.  And amid the welter of issues to ponder here, I’m thinking of one: what does Cecil’s death say about our lives, and our pursuit of meaning through purchased “experiences” — particularly in wilderness?

Big-game hunting in Africa — like all the other historical depredations of Africa’s natural resources, from Congo rubber to diamonds — is very big business. (On the radio this morning, I heard that a hunt like this can cost $45,000 or more.)  And it’s an uncomfortable reminder that the last frontier (pun intended) of purchaseable commodities is experiences.  Wealth and capital are being concentrated into fewer and fewer hands, and those hands are getting very full.  When all your material needs are more than met, when you’ve fought for and won an Hermes Birkin bag or rare Swiss watch, what is left to want?  What’s unique? What’s authentic?  What’s real? What can break the skin of habit that grows like mold over the surface of even the most privileged life? As Russian critic Victor Shklovsky famously wrote:  “If someone compares his sensation at holding a pen for the first time and then holding the same pen for the ten thousandth time, he will agree with us…. Habit removes works, clothes, furniture, one’s wife, and the fear of war.”

One answer to these questions is experience: meaningful contact with something not yourself that expands the self and continues doing so in memory, Wordsworth-style.  And the richer you are, the bigger the experience you can buy.  You could become a Manhattan socialite summitting Mount Everest with her Dean & DeLuca espresso machine in tow (memorably described by Jon Krakauer in Into Thin Air.)  You could become the star of a splashy, tacky pseudo-Tolkein wedding among towering redwoods.  Or you could stalk and shoot a rare animal and bring its head home to hang on your wall as a reminder — once habit starts to reform over the surface of your life, like a skin on stale pudding — that once you felt something.  (Never mind what the animal felt.)

Notice that all these “experiences” have one thing in common: contact with the natural world, even though they are still mediated by guides and tools (and espresso machines.)  We still seek that world, as humans; it still nourishes us in ways we can’t anticipate until we experience it.  Craig Childs’ great book The Animal Dialogues describes how  encounters with animals — from grizzlies to mountain lions to owls to even our own housecats — can shake us up and open our eyes, knocking us off our self-appointed position at the center of the world in a way we need.  We seek the wild, and what lives there.  Yet as an impoverished, and impoverishing, landscape of asphalt and big-box stores covers more of our environment, we feel trapped, anxious, eager for contact with nonhuman animals and soil and sky and something that just feels real even if we have little idea of how to get there.

Wilderness hiking is one remedy.  Rafting, biking, or even just walking down the street on a late summer evening, with the outrageously gorgeous mellow light of oncoming sunset in the sky, are others.  So is horseback riding, and farming.  So is hunting.  I’m not suggesting all these are equivalent in every way, just that in my experience — and I have experienced all of them — they provide that burst of contact with reality we crave, the humbling and necessary and wondrous reminder that (to borrow from Matthew Crawford) there is a world beyond your head.  An attentive encounter with the natural world — and the experience of deep interaction with it that hunters and hikers describe in varying forms — can rip the skin of habit away.

Yet this lion-shooting dentist should not call himself a hunter.  He’s a trophy-shooter.  And even if you don’t like hunting and don’t participate in it, you might agree there is a difference between the two.  Good hunters, like the ones I grew up with and deeply respect, would be the first to agree with you.  One hunter friend distinguishes “shooting” from real hunting, which he describes a complex dance between hunter, dog [and sometimes horse], and environment, and in which the process of contact with a reality beyond yourself — not an object to hang on your wall — is the real goal.  “Hunting,” he writes, “is an honorable and noble venture that should be pursued with gear and guns that evidence knowledge of and respect for the sport’s history, traditions and ethic.”  (Note: ethic.)  The great Montana writer Rick Bass says of deer hunting, which feeds him and his family through the winter, “There’s something up, out there in the woods, a thing that our scientists and atom-chasers and neutron-smashers will likely never be able to prove or discover — a braided spirit, is what it seems like to me — and sometimes a hunter finds him- or herself inside it, and other times outside it.  It exists, though what to make of such knowledge, I am not quite sure, other than to try to remember, always, to say please and thank you.”  Another hunter I know speaks of mourning: “When I take an animal’s life,” he says, “I am taking a part of my own, as well.”  And like Bass, he always says thank you.  The good hunter isn’t seeking to buy an exceptional experience, including exceptions to human and natural law.  S/he isn’t after a trophy.  S/h is seeking to submit himself or herself to the natural world and its laws, which will mean experiencing whatever that world decides is on offer that day.  Fundamentally, this is a posture of humility, not arrogance.

Yet making the natural world available as a place of “authentic experience” also risks opening it up for economic exploitation as just another “resource” (one reason among many to resist the language of “natural resources.”)  What ethically grounds positive human-and-natural-world encounters, at least in my view, is the self-examination and humility involved, gratitude for one’s place in a right relationship to the nonhuman, and the recognition that money is not the only measure of value in encounters with what’s left of a wild world.  Trophy-shooting is antithetical to population-balancing conservationism, self-sustenance, or meditative process (for the sake of which some hunters find but choose not to shoot their quarry, like a trout fisherman’s catch-and-release.)  And it’s antithetical to wilderness ethics as many hunters know them:  the quarry becomes mere commodity and the “value” in play is monetary, based on scarcity and capture and the degree of cash you shelled out to get that animal’s head and show it off (again, think Birkin bag.)  It makes very plain what critics of hunting in general will charge, not always unfairly: that in seeking their purchased “experience,” these humans are subordinating other creatures unethically and carelessly to their own consumer desires.

And it does become a consumer desire, since money tends to focus every standard of value around itself.  The Guardian writes, “Bryan Orford, a professional wildlife guide who has worked in Hwange and filmed Cecil many times, told National Geographic that the lion was the park’s “biggest tourist attraction”. Orford calculates that with tourists from just one nearby lodge collectively paying €8,000 per day, Zimbabwe would have brought in more in just five days by having Cecil’s photograph taken rather than being shot by someone paying a one-off fee of €50,000.”  Yet even here, we’re still insisting on money as a measure of Cecil’s “value,” rather than saying that Cecil, as an [increasingly rare] animal, has a right to exist, just because his presence on this earth contributes to the kind of wilderness human beings need for our own spiritual survival, whether we acknowledge it or not.

We can mourn Cecil, and we should.  But let’s not let Internet outrage substitute for real and difficult thinking about how we position ourselves on the continuum between exploitation of the nonhuman world and right relationship to it.  This thinking can include developing the kinds of attention and humility that can foster non-consumerist experiences of the world and (as Father James Martin writes) can widen our view of of human and nonhuman suffering.  Even though we may abuse it, we need to know that everything on this earth is not subordinate to us and our needs.  And as humans, we need that to be the case, even as wilderness, in theory and in fact, gets increasingly rare, nibbled-away-at, and more in need of real defense.

This entry was posted in animals, conservation. Bookmark the permalink.

1 Response to Wilderness, experience, and commodity.